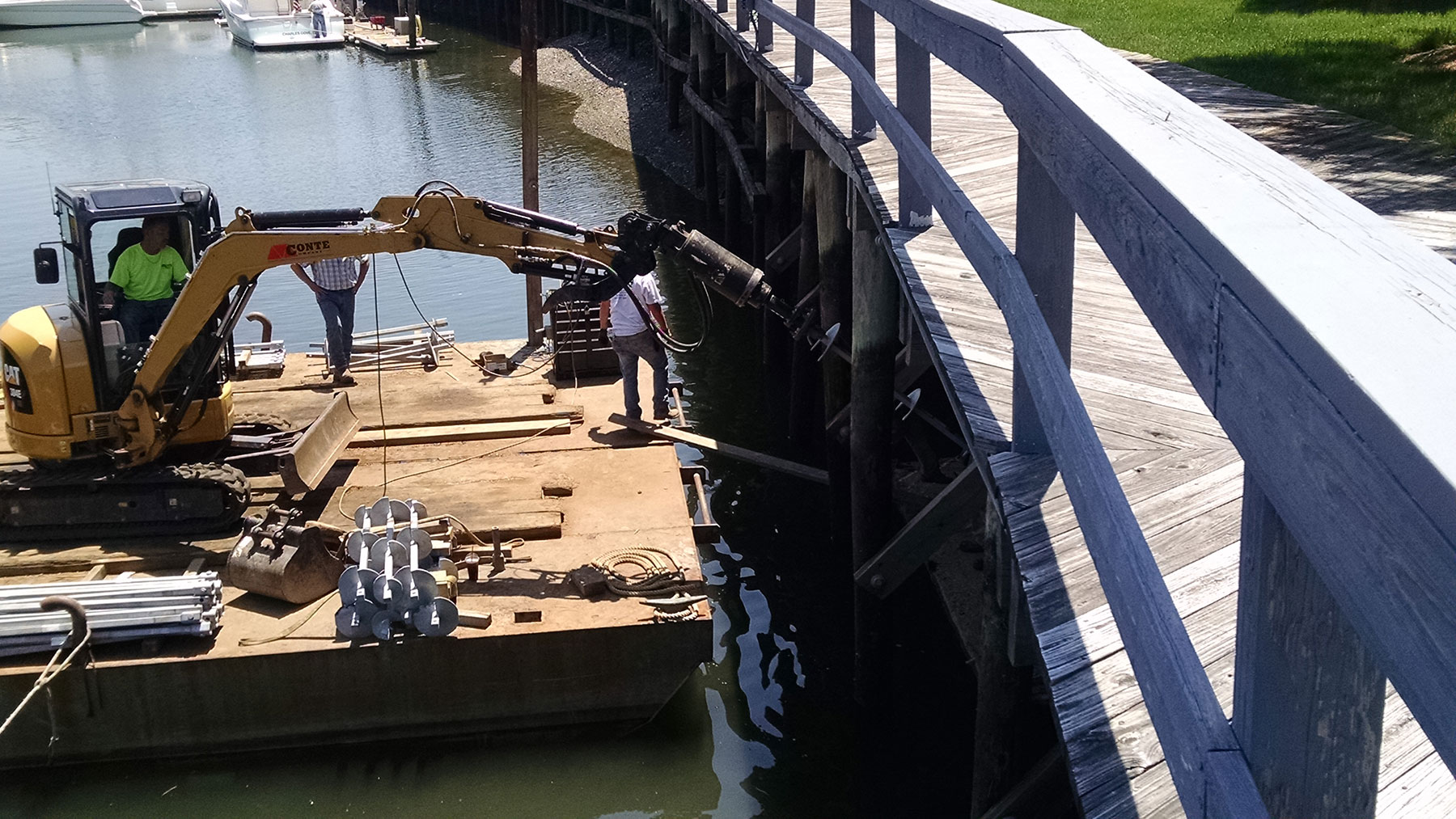 Norwalk, CT is our home and the place where Conte Company was started in 1948. The town was founded in 1640 on the southern shoreline of CT known as the Long Island Sound. Norwalk is less than 50 miles from downtown Manhattan, but light years away in attitude and economic history.

Well known for its oystering industry, the town grew and prospered, attracting new residents who want to live on or near salt water while still in commutable distance from NYC. Charles Cove is a man-made tidal inlet, a quarter mile cut in from Long Island Sound, surrounded by a boardwalk, boasting luxury boat marinas and high-end condos. The Charles Cove Condos, which wrap cozily around the end of the cove, were built in 2004 and are highly popular for their location near beaches and shopping. Recent sales have them priced at just under a million dollars each. 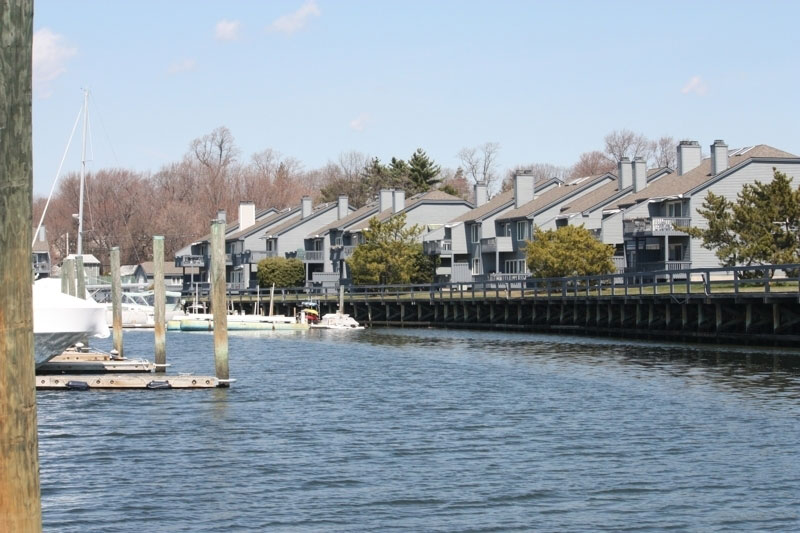 Rotting Bulkheads in Need of Maintenance

Last year, the board of directors of the Charles Cove Condominium complex were informed that the wooden bulkheads holding up their complex were rotting and in serious danger of collapse. Apparently, the salt water tides running in and out of Charles Cove twice each day had taken a serious toll on the foundational structures. The residents, who strolled peacefully along the water on the complex’s walkways probably had no idea they were right on top of a disintegrating bulkhead.

Fortunately, someone did notice the rot and a marine contractor was quickly hired. But, instead of attempting a bulkhead repair by replacing the old bulkhead, the engineers proposed building a new bulkhead directly over the old one using new bulkhead sheeting, secured with piled tiebacks. This was going to be challenging, considering the natural elements in play, so the marine contractor wisely placed a phone call to Conte Company. (We are well known as the folks who love a good challenge and this one was going to be a doozy!) 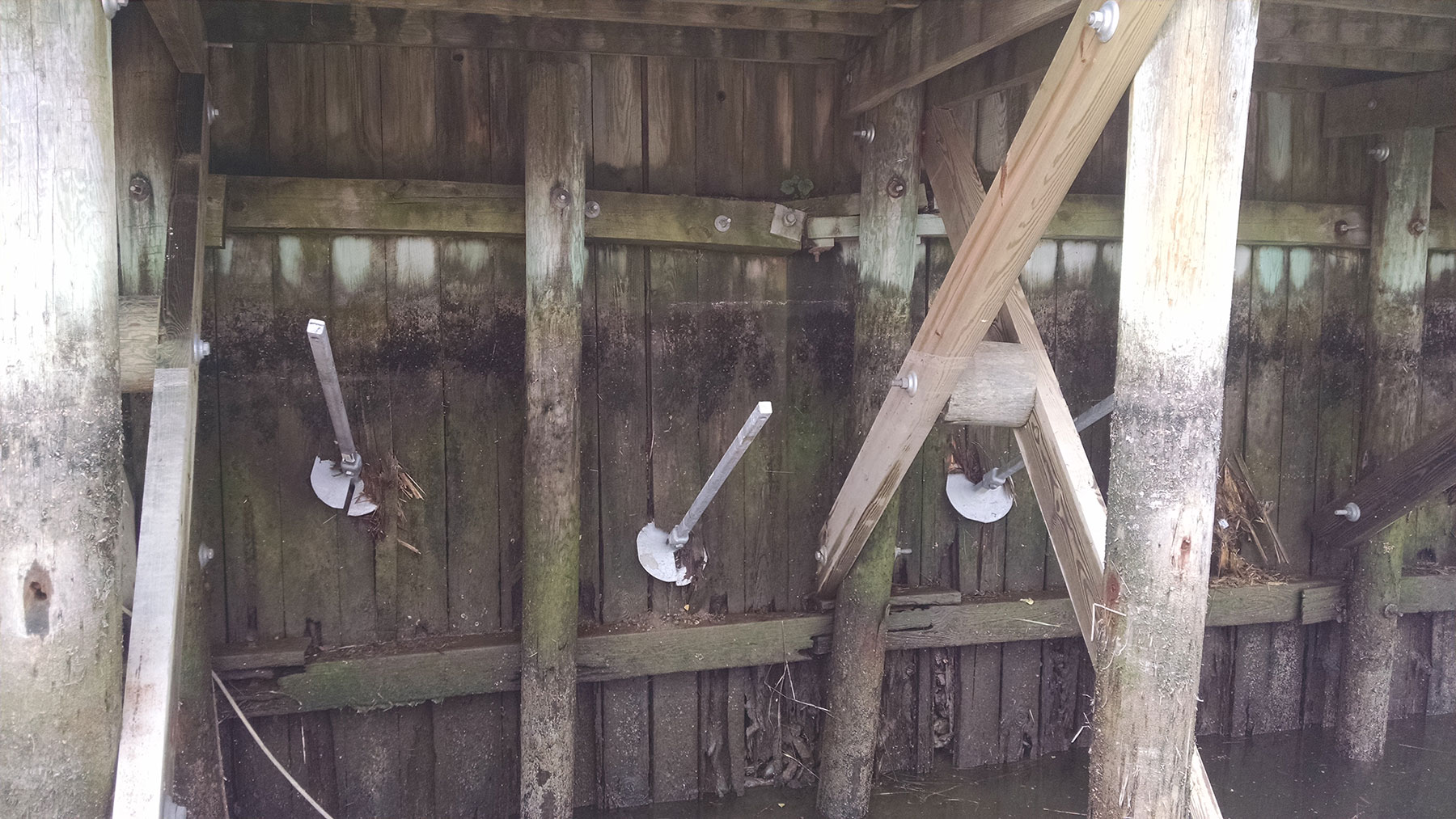 Barging-In and Timing the Tides

We are well known for our helical pile technology expertise, which turned out to be the perfect solution to create tiebacks for this precariously threatened bulkhead.

We determined that our helical pile tiebacks would have to be securely drilled into the old timber retaining wall, a structure directly perpendicular to the salty waters of Charles Cove — and right below that 8-foot walkway. The new, poly-coated composite wall could then be attached to our secure helical piles. And, because this very tight working space was not accessible from land, we also planned to bring in a small barge to hold and transport our drilling equipment and crew for the bulkhead repair.

However, being raised in a shoreline town, we were aware in advance of a bigger challenge. Each 12.5 high tide was going to raise our working barge at least a few feet and once raised, we knew that our drilling boom would not always fit under the walkway. We would only be able to work from low-tide until just before mid-tide. Providing this critical timing information to the marine contractor in advance enabled them to plan ahead for other aspects of the project and helped to keep the project on schedule.

(we bend over backward to work efficiently) 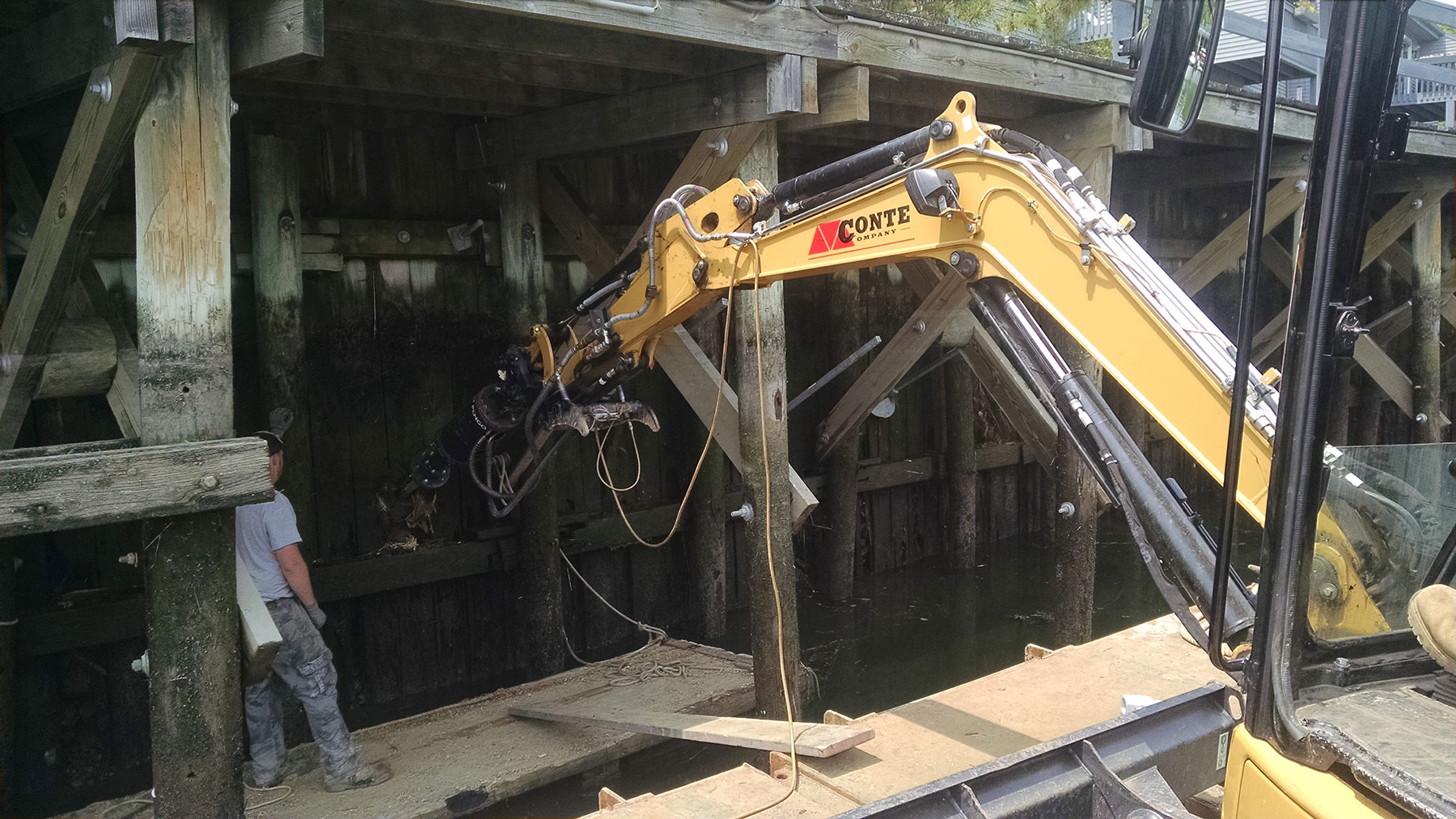 With the tidal problems addressed, our crack team anticipated, and solved, another watery problem before we began our bulkhead repair work. The barge, small as it was, still needed to be anchored 10 feet away from the bulkhead. The vertical piers that hold up the boardwalk kept the barge and our machines from getting up close and personal with our work. We were not going to get it close enough for our boom to reach where the piles needed to be drilled.

Our plan was simple, yet effective. We used standard pile extensions to lengthen our reach from the barge. Two crew members on the barge would load the extensions onto the helical piles. Two other Conte workers worked off a small floating dock where they could jump into the shallow waters, close to shore, and bolt the ends of the shaft extensions onto each helical pile as it was drilled into the wall.

At Conte Company we are team players and will to jump through hoops, or off barges, to get the job done right!

Ask us what we can do for your next foundation job

A few weeks later the job was done! Our men dried themselves off, the barge was floated out of Charles Cove and the residents began to stroll the walkways again. The customer, in this case, the condo’s board of directors, was confident that the bulkhead repair was completed according to the highest standards, as it passed all required inspections. Their residents were safe to once again stroll the walkways along Charles Cove and watch the sunsets —which are absolutely gorgeous over the waters of historic Norwalk, CT. 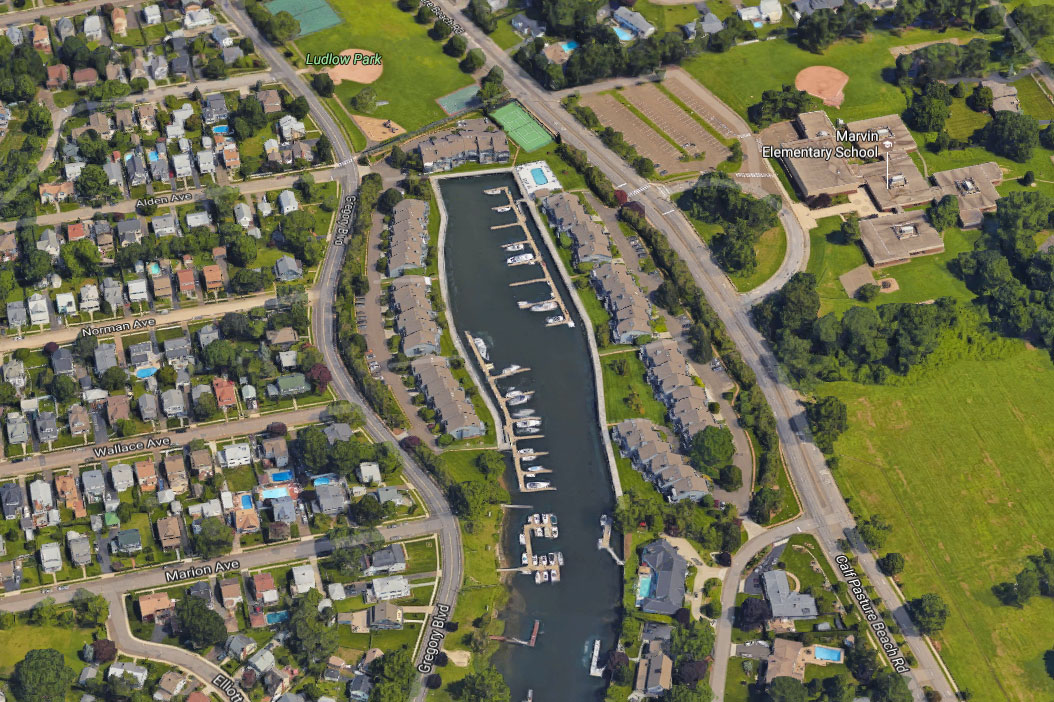 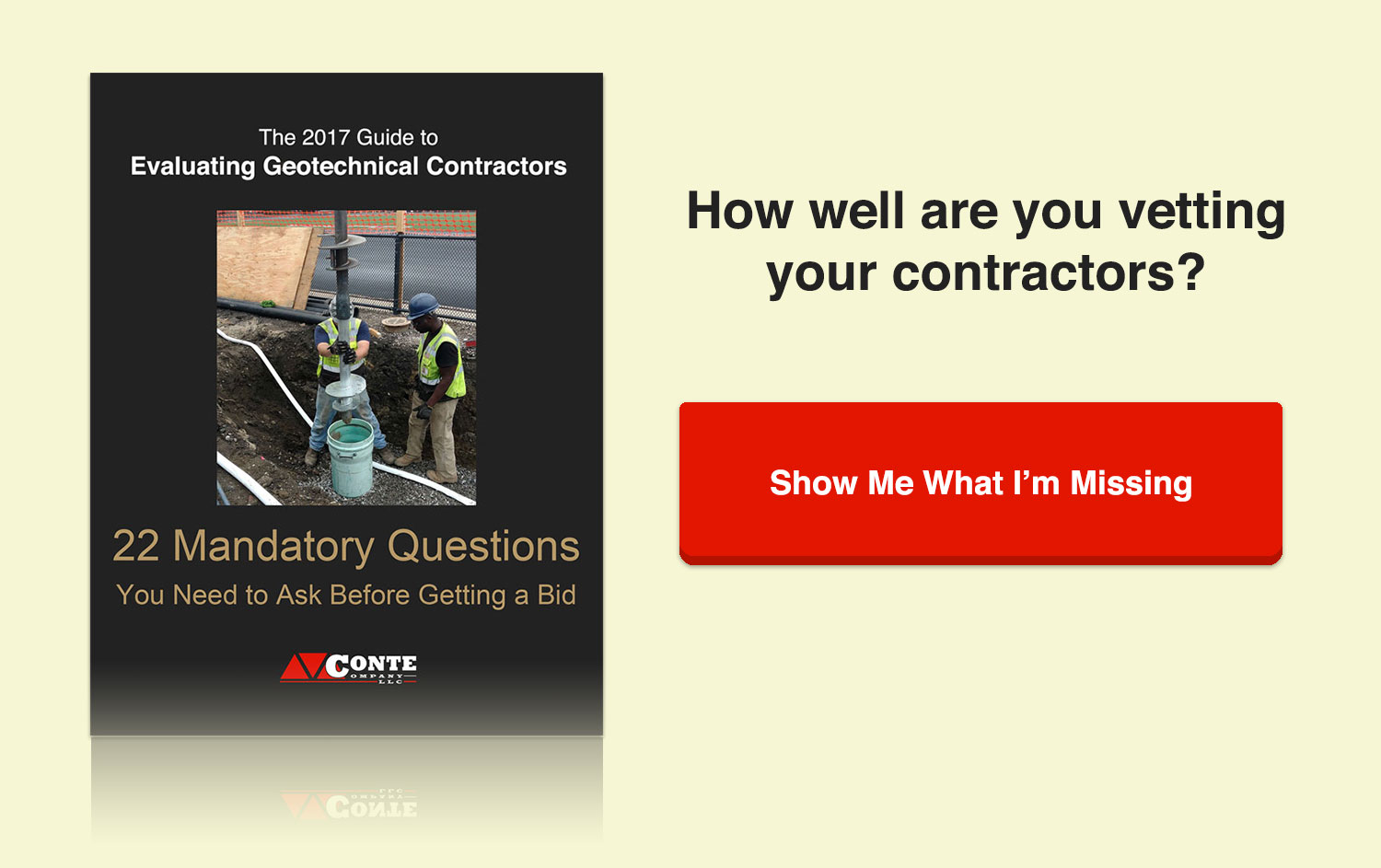 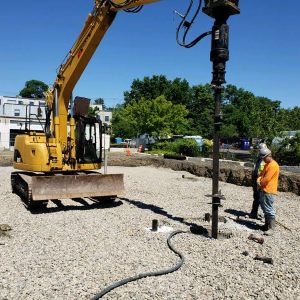 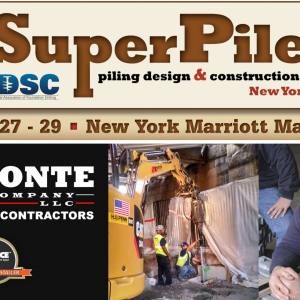 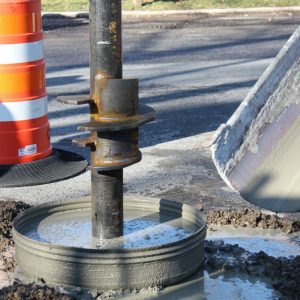 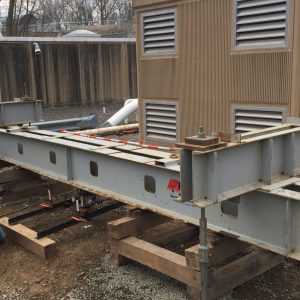 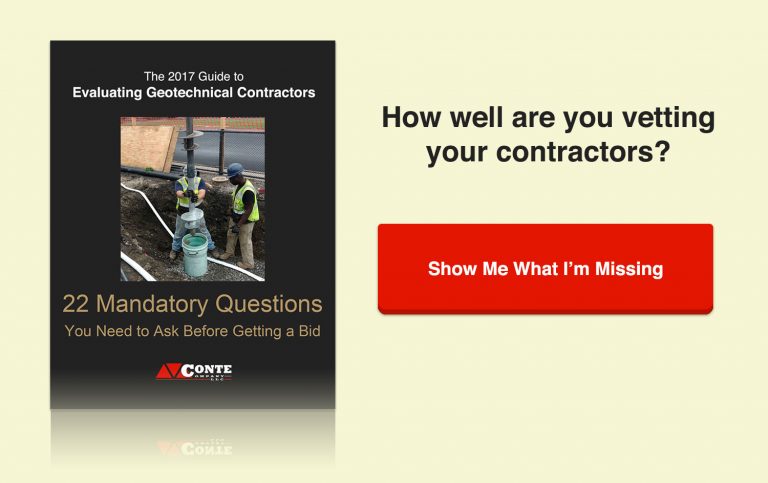